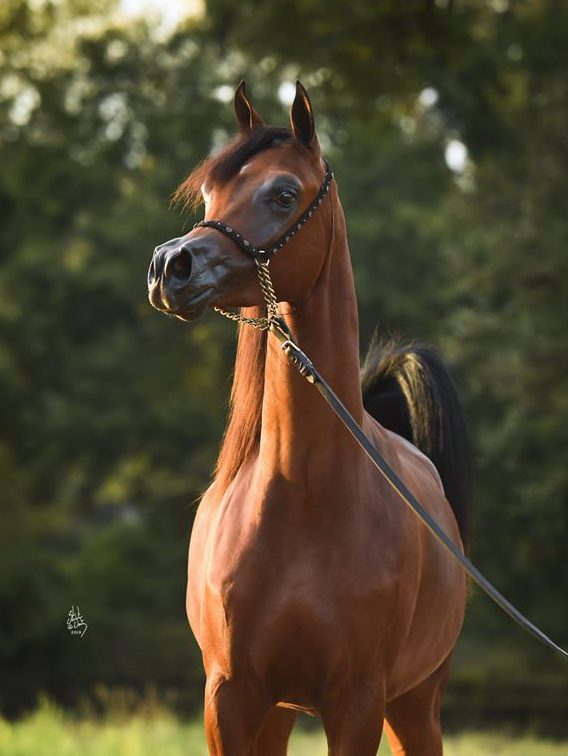 In 2019, the world stage was illuminated by RHAN AL SHAHANIA, an indomitable force in yearling colt competition at the most prestigious global events. Named Arabian Breeders World Cup Gold Supreme Champion, unanimous U.S. National Champion, and World Gold Champion at the Salon du Cheval with a score just shy of 93 points, RHAN made breed history as the only colt ever to win top honors in Triple Crown competition on two continents in the same season. The opportunity to reap the rewards of the proven cross that created the excellence of RHAN is now available to the discerning connoisseur, with the unborn foal out of JWAAHER AL SHAHANIA with MARWAN AL SHAQAB. A gorgeous daughter of FA EL RASHEEM, the newly crowned Leading Sire at the World Arabian Championships, JWAAHER will undoubtedly contribute the exotic type, aristocratic quality and ultra-refined elegance for which the EL RASHEEM get are prized the world over. A young matron of just six years of age, JWAAHER is proving that the get of RASHEEM are so much more than just show ring superstars, extending the EL RASHEEM excellence to the next generation with unprecedented results. By breeding JWAAHER to MARWAN AL SHAQAB, the influence of the global ‘Paragon’ is intensified, as MARWAN is a significant source of brilliance in the pedigree of the late great FA EL SHAWAN, sire of FA EL RASHEEM. Add to this the influence of VERSACE, ALI JAMAAL and EL SHAKLAN, as well as legendary matrons KAJORA, PRECIOUS AS GOLD and ELKANA, and the inevitability of fame and fortune awaiting this unborn foal is undeniably assured