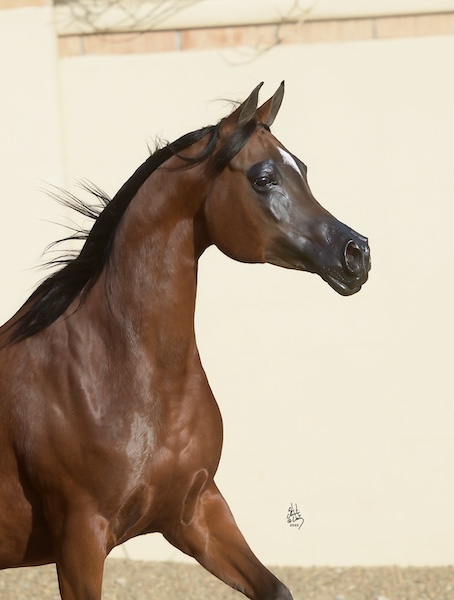 A proven producer of world-class quality foals, the Belgian-bred RA MARWANS ELYGANCE exemplifies the best of her internationally admired heritage, passing her most exemplary qualities onto her progeny with reliable consistency. As her name suggests, ELYGANCE is a daughter of the unrivalled ‘leading sire of the new millennium’ MARWAN AL SHAQAB, putting her in the company of dozens of the best producing mares in the breed. While the sons of MARWAN have shone in the show ring spotlight for the past several years with unprecedented success, and populated the leading breeding programs the world over with generations of exceptional descendants, the MARWAN daughters have been progressively, and unassumingly, contributing their own intrinsic value to scores of extraordinary produce. Imagine the modern breed without World Champions EXCALIBUR EA and FADI AL SHAQAB, or U.S. National Champion POLIDORO FC, all maternal grandget of MARWAN AL SHAQAB. The ability of MARWAN to nick with so many bloodlines from all sources is truly remarkable, evidenced yet again in the respected foundation American-Russian-Polish blend heritage of ELYGANCE’s dam, European Aristocrat RA COOL ELYGANCE US. MARWANS ELYGANCE has proven to be as predictably prolific as her dam, with multiple progeny already exported overseas and an increasing number of international quality get to her credit, including the young Regional winner TAJ RAHEEM (FA El Rasheem), as well as World Cup Bronze Champion and World Top Ten MAYSAH ALJASSIMYA (Monther Al Nasser). Selling in foal to the reigning Leading Sire at the 2019 World Championships, FA EL RASHEEM, RA MARWANS ELYGANCE is a sure bet for infinite future success.