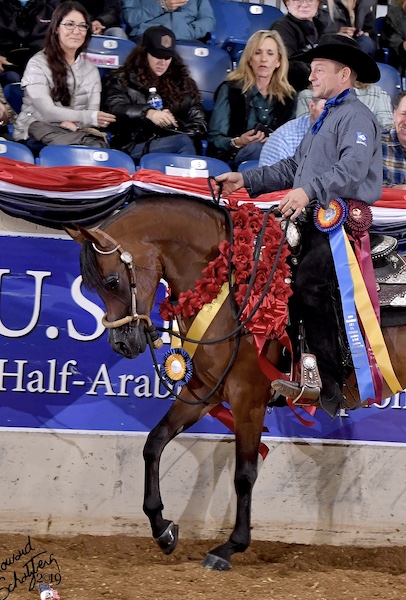 Descending from generations of Arabian performance and Western Pleasure royalty, the Jerland-bred PROMISE ME J has already delivered on her prophetic namesake, by honoring her unparalleled heritage of athletic excellence with a stellar performance in Tulsa. As the reigning U.S. Arabian Western Pleasure Futurity National Champion, PROMISE ME J is the modern embodiment of a succession of national champion winning Western Pleasure icons, strongly influenced by her maternal grandsire KHADRAJ NA+++/, the Leading Living Sire of Western Pleasure champions in the breed. PROMISE ME’s dam is U.S. and Canadian National Reserve Champion BROKEN PROMISES PGA, a daughter of the Sheila Varian-bred Aristocrat PROMISE V, by legendary athlete HUCKLEBERRY BEY, whose enduring influence as a sire pervades every division and discipline in which Arabians compete and excel the world over. One generation further removed is the precious PAVANE V, a full sister to Sheila’s invaluable MOSKA, both sired by the era defining KHEMOSABI++++//, the only horse ever to be named U.S. National Champion Stallion and Western Pleasure. At the tail-female source of PROMISE ME’s pedigree are the two icons, U.S. National Champion BAY-ABI++ and Polish import BACHANTKA, that not only established the Varian Arabians program as one of profound importance, but redefined the standard of the authentic Arabian athlete for the modern breed, to which every successful breeding program dedicated to creating horses of both beauty and utility owes an inestimable debt. The added refinement, elegance and exotic type of World Champion QR MARC, combining the superlative qualities of global Sires of Significance MARWAN AL SHAQAB and ALI JAMAAL, makes PROMISE ME the quintessential modern athlete, prepared to excel at the highest level with brilliance and reliability for years to come