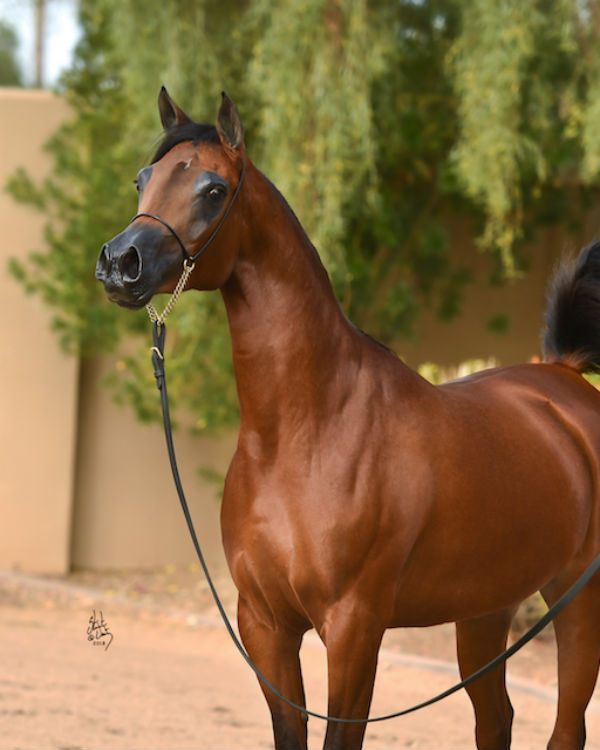 A rare opportunity to obtain the most sought-after bloodlines from the world’s leading international breeding programs, beautifully packaged in a young 5-year-old mare with several high-profile show titles to her credit. ORIANNAA is the real deal, a daughter of the Living Legend himself – World Champion GAZAL AL SHAQAB, through whom, ORIANNAA is blessed with his superlative balance, substance and structure, as well as the extraordinary forehand of her paternal granddam KAJORA – U.S. National Champion Mare and unquestionably one of the most enduringly influential mares in the breed. ORIANNAA’s dam, ABHA ORLITA, is a product of the world-renowned Ses Planes breeding program of Marieta Salas, universally respected as the source of exceptional Arabian horses for more than half a century. Built on a foundation of superior Straight Spanish bloodlines, the unique group of Ses Planes-bred horses is revered for uncompromising structure and athleticism, smooth well balanced builds, long well shaped necks and perhaps the largest, darkest and most luminous eyes in the breed. Marieta’s use of the sensational Straight Spanish sire El PERFECTO resulted in a collection of broodmares unrivaled anywhere in the world, the combination of which, with the GAZAL AL SHAQAB son MARWAN AL SHAQAB, has enriched the breed with the likes of ABHA PALMA, ABHA MAHARANI, MANSOUR AM and POLIDORO FC, while her further use of MARWAN with her Spanish-related mares is responsible for breed icons such as ABHA MYRA, ABHA QATAR, ABHA RAIPUR, ABHA QALAMS and FADI AL SHAQAB.