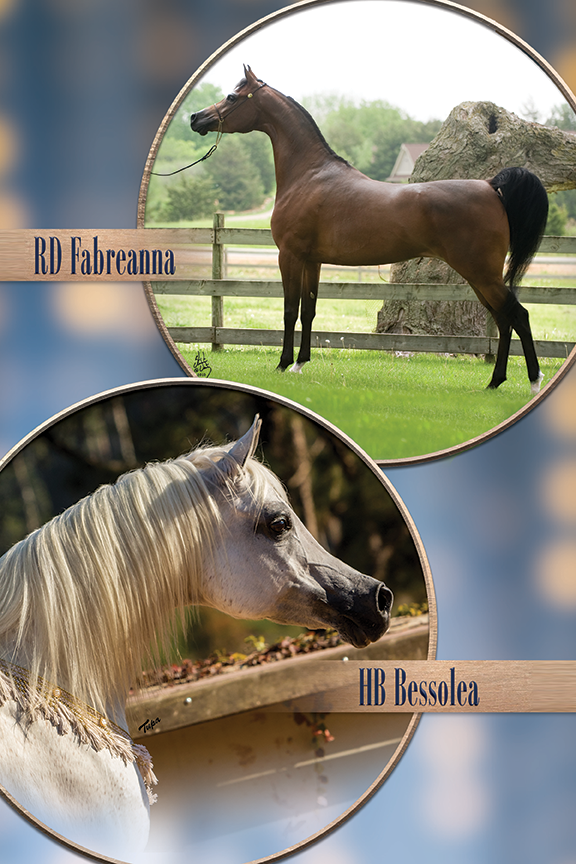 An extraordinary opportunity of infinite possibilities awaits… Double your surefire success with an embryo each from two of the most accomplished and universally admired matrons in the breed, the jewels in the crown of Haras Vila dos Pinheiros: HB BESSOLEA and RD FABREANNA.

HB BESSOLEA
No other matron in the new millennium has exemplified consistency and world-class quality in the Arabian breed like HB BESSOLEA, an international Aristocrat of astonishing achievement, especially reflected in her perfect production record with ‘the Paragon’ MARWAN AL SHAQAB. The produce of HB BESSOLEA have conquered the championship lineups at nearly every major show of merit in North and South America, as well as in Europe and the Middle East, dominating the winners’ circle at the U.S. National Championships, the Brazilian National Championships and Scottsdale, as well as the medals in Las Vegas, Dubai, Menton, Doha, Aachen and Paris, with iconic performances from BAANDEROS, BESSOLINA EL MARWAN, DIRAR AL SHAQAB, BINT BESSOLEA, BAAHIR EL MARWAN, and the reigning World Gold Champion BAVIERA HVP. The premier daughter of superior broodmare sire BESSON CAROL, from whom she inherits an exceptional build and balance, as well as her enchanting feminine allure, HB BESSOLEA is moreover blessed with charismatic show attitude and scope of her maternal grandsire ENCHANTER MAGIC FHP, enhanced further by the natural athleticism of maternal granddam JA HIGH SOCIETY, a delightful daughter of the iconic BARBARY. Add to this the venerable cross of TORNADO with SILVER DRIFT to her tail-female ancestry, and it is no wonder HB BESSOLEA reigns supreme as the ultimate Arabian Aristocrat.