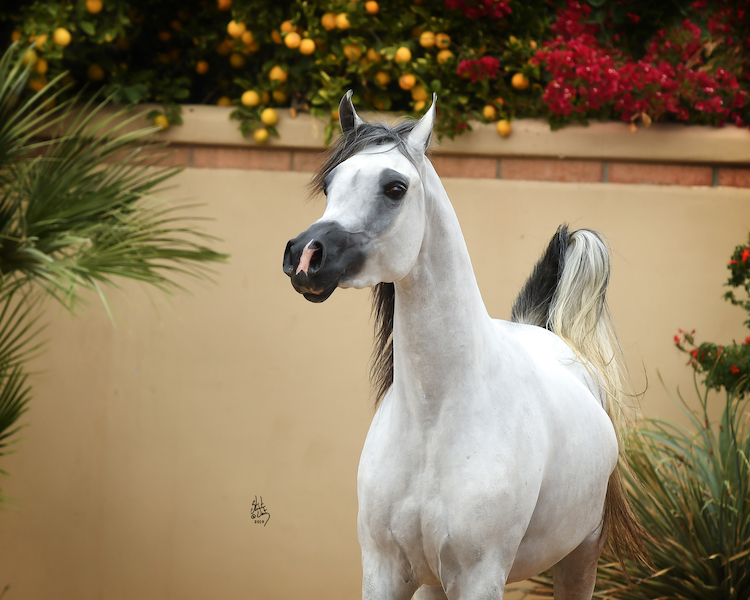 A cause for celebration – JANDA represents the exceedingly rare opportunity to purchase a young daughter of the ‘Queen of Haras Meia Lua’, and one of the most universally beloved and admired mares in the history of the Arabian breed: JULLYE EL LUDJIN. Aptly bearing the Meia Lua stud designation, JANDA possesses in abundance all of the elements that have immortalized the legacy of the late Lenita Perroy everywhere across the globe where the Arabian horse is reared and revered. Uniquely, JANDA is endowed, as both paternal & maternal grandsire, with a double dose of LUDJIN EL JAMAAL, one of Lenita’s earliest successes as a breeder, proving her now legendary nick of crossing ALI JAMAAL, the centre of her breeding universe, with the daughters of the immortal EL SHAKLAN. This positive genetic contribution is enhanced by the infusion of two of her most important foundation mares past and present, the BEY SHAH daughter NV JUSTADREAM and the ENZO daughter ELLE DORADA, respectively. Through ELLE DORADA, JANDA shares a common legacy with Poland’s unparalleled ‘E’ family of champions, tracing directly through eight successive generations of globally influential dams to uber athlete ESTOKADA, an Oaks & Criterium winner on the race track and the most important Michalow foundation mare. This unique combination of several of the breed’s most celebrated matrons – U.S. National & All Nations Cup Champion EL DORADA, European & Polish National Champion EMIGRANTKA, and the immortal ‘Pearl of Michalow’ EMIGRACJA – with JULLYE EL LUDJIN, makes JANDA an irresistible offer for the serious breeder.