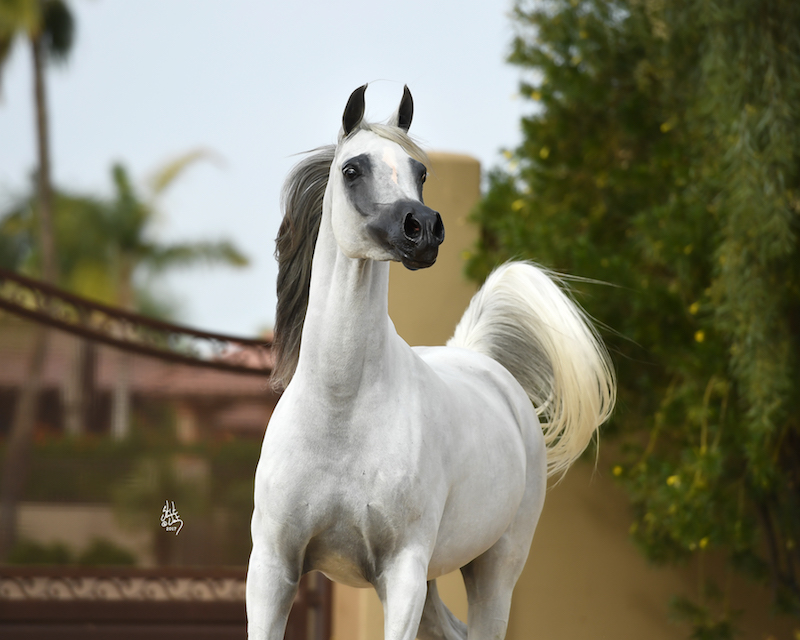 The daughters of Living Legend and three-time World Champion MARWAN AL SHAQAB are prized as some of the best show and breeding mares in the world. From this remarkable collection comes the beguiling BESSOLINA AL MARWAN, a multi-Regional Champion and U.S. Reserve National Champion whose namesake pays tribute to one of the most reliable and universally acclaimed crosses of world-class quality in the breed, that of MARWAN with global Aristocrat Dam HB BESSOLEA. Incredibly, seven of BESSOLEA’s ten champion produce are sired by MARWAN, with a further two sired by his sons, an awe-inspiring nick that has blessed the breed with: U.S. National and Scottsdale Champion BAAHIR EL MARWAN; two-time Brazilian National Champion BAVIERA HVP; multi-international Gold Champion BINT BESSOLEA; and three-time World Champion, and one of the most highly decorated show horses in the history of the breed, BAANDEROS. HB BESSOLEA is unequivocally responsible for raising the profile of her sire, U.S. and Canadian National Reserve Champion BESSON CAROL, to a sire of world-class status, with his daughters now prized as top producers in leading breeding programs around the globe. BESSOLEA’s genetic excellence is further enhanced by her celebrated dam, Aristocrat producer and twice U.S. National Top Ten CREDIT TO SOCIETY, daughter of the show-stopping Canadian National Champion ENCHANTER MAGIC FHP, whose dam was a beautiful, highly animated daughter of the legendary BARBARY. With proven show ring credentials, and a genetic heritage that has redefined excellence in the modern Arabian breed, BESSOLINA AL MARWAN represents the opportunity of a lifetime for the ambitious breeder and show home.