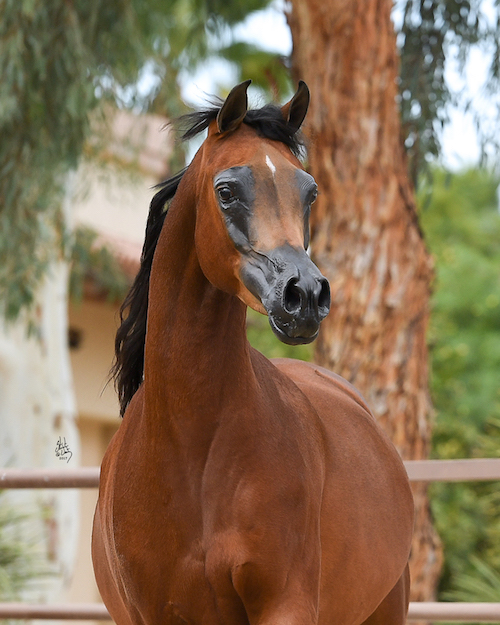 The true prototype of consummate beauty and proven utility in one perfect package, AURORA ALJASSIMYA embodies everything the Arabian mare can and should be. With the style, structure and appeal necessary to win in the halter arena, AURORA ALJASSIMYA has most importantly proven herself a versatile and capable athlete, succeeding brilliantly as a Top Ten Champion at both the U.S. Nationals, as a Hunter Pleasure Junior Horse, and at the most competitive Arabian horse show in the world – the Scottsdale All Arabian – in the Walk/Trot division, further proving her invaluable worth as a reliable youth mount. As sweet, kind and intelligent as she is superbly conformed and beautiful, AURORA ALJASSIMYA is exactly what one would expect from her world-class pedigree. Her balance, smoothness and glorious forehand are undeniably MARWAN AL SHAQAB, while her substance, elegance and exuberant tail carriage are unmistakable hallmarks of her maternal grandsire VERSACE. A further analysis of AURORA’s maternal lineage reveals several exceptional infusions of genetic excellence, including: SHF SOUTHERN WHIZ – the intensely line-bred RAFFLES/MIRAGE/SKOWRONEK/FERZON heritage sire best known for his incomparable World Champion daughter SHF PEARLIE MAE; Polish super sire EUKALIPTUS, whose daughters figure decisively into nearly every major modern success for the State Studs; pure Polish halter and performance superstar GWALIOR; and the iconic BASQUINA – herself an archetype for the beautifully athletic Arabian mare, as a National Champion in both halter and performance, and one of the six remarkable full siblings out of meritorious matron HABINA and sired by the immortal *BASK, all of whom still exude a profound influence on the breed.