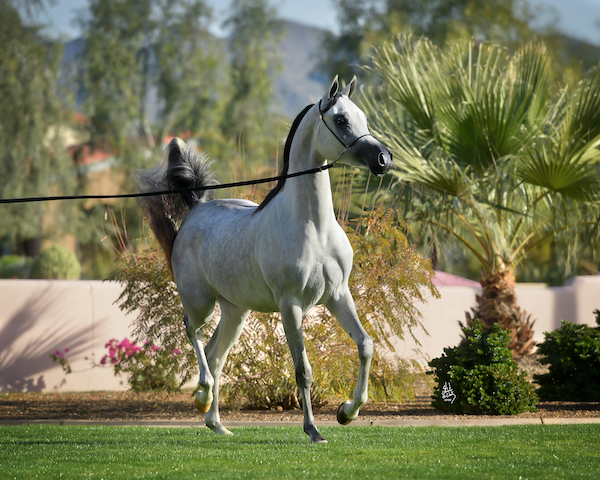 An enchanting young filly who unites the genius of many of the world’s most accomplished and respected breeding programs spanning the centuries and the continents, AJS EMARA MEIA LUA embodies the best of her meticulously crafted aristocratic heritage. Maternally, EMARA, as her namesake denotes, is the modern day product of decades of insight and dedication generously bestowed upon the Arabian breed by the late Lenita Perroy’s Haras Meia Lua, a program singularly focused around the infinite excellence of her cornerstone breeding stallion, the iconic ALI JAMAAL. Cleverly and carefully combined with the positively prolific genetics of EL SHAKLAN and BEY SHAH in her foundation stock, Lenita nurtured a dynasty of international champions and breeding pillars that forever constructively altered the destiny of the breed, evident early on in EMARA’s paternal grandsire LUDJIN EL JAMAAL, one of Lenita’s most important and enduring sires. Ever impressed by the maternal lines of Poland, Lenita introduced one of her most important dam families in the new millennium, that of Michalow’s legendary matron EMIGRACJA, through her European Champion daughter EMIGRANTKA and her phenomenally successful daughter, EL DORADA, a multi-international champion who is EMARA’s direct tail-female ancestor. EL DORADA further strengthens the influence of ESTOPA, Om El Arab’s ‘Matron of the Century’, with additional infusions present in the pedigree of EMARA’s sire, the exotic SMA MAGIC ONE. A renowned son of the Midwest Station I-bred PSYTADEL, MAGIC ONE is further blessed with a double dose of one of Europe’s most admired Aristocrats, SASKIA RJ, making EMARA a breeder’s dream come true.